“Perfect fullness is always to come, and we do not need to demand it now. This keeps the field of life wide open and especially open to grace and to a future created by God rather than ourselves. This is exactly what it means to be ‘awake’ as the Gospel urges us.” 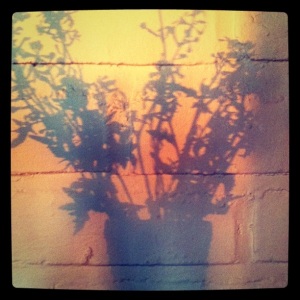 I don’t actually remember where the idea came from. But, a while back, as I was pondering life, most likely while working in the garden, it came to me, what I would ‘give up’ for Lent.

Now, I’m not a big ‘give up something for Lent’ kind of person normally. But as I was pondering I realized that I could not remember the last time that I was in one place for any length of time. I do know that I happened to be in Mexico once for three weeks straight. That was back in November of 2008. Over two years ago. I remember it because it stood out as a record.

So I began to consider that for Lent I would ‘give up’ traveling. I realize, this might sound crazy to most normal people. “Poor you, you are giving up traveling for Lent.” But in my current fairly unpredictable and nomadic life, it actually seems like quite a challenge, staying in one place for 40 days (plus Sundays, which really makes it more like 45, but minus one mandatory presbytery meeting for which I will have to ‘travel’ to Southern California). Two years ago I traveled (literally) around the world during Lent, so I figured, this year, why not stay in one place?

(Ironically, as I am typing this, a road runner just flew onto the patio, directly outside the window. A quick search on roadrunners, or a bit of Saturday morning cartoon time will tell you that the roadrunner is symbolic of speed and movement…)

Last year during Lent I was in Thailand. One day, as I was doing some sightseeing, I happened into a Wat (Buddhist temple) that I had read taught free meditation classes. I walked in and was greeted by a monk, and saw a roomful of people wearing what looked like white scrubs, walking back and forth, very slowly, silently, in a very small space. My “what have I gotten myself into” radar went off immediately, but it was too late, I had already been spotted by the ‘greeter monk’ who was welcoming me to the temple.

This time the man who seemed like the senior monk lead me to a fluorescent-lit, downstairs basement with narrow windows along the edge of the ceiling and metal fans blowing at intervals to move around the hot air. He showed me again how to do the walking meditation, slowly, very slowly, putting one foot slightly in front of the other for about four feet, then methodically turning around, walking the same four feet, turn around, repeat. It was all very intentional, very slow. Did I mention that it was slow?

He looked up at the clock. It was around 6:15. “Don’t stay past 8pm–you should get back to your hotel before it’s too late,” he said, and left.

An hour and a half? I thought to myself. Really? You think I can just walk back and forth, painfully slowly, for that long and not run screaming for some pad thai? They don’t eat after the noon meal, and since I had been at the monastery since the afternoon, I too had not eaten since the noon meal, though I had every intention of doing so.

But I started walking. Back and forth. Slowly. Methodically. Intentionally.

Here’s the crazy thing–when I finally looked up at the clock it was 7:30. I’ve gotta leave in 15 minutes, I thought to myself. But I really want to keep walking. So I did. Until 7:44. Just one more, I said to myself, like a kid who doesn’t want to get out of the pool when it’s time to leave. I finally dragged myself out of there by 8pm.

It was amazing. There was something about the slowness and the repetition and the ‘not getting anywhere’ that was deeply centering. Once I had overcome the ‘are you kidding me’ stage, I really didn’t want to stop. What an incredible experience, I thought to myself on the cab ride back to the hotel.

But the other crazy thing? I haven’t done it again since.

what is ‘manuscript study’ (and why in the world would I care?)

I first came upon the concept of ‘manuscript study’ in Bangkok, Thailand. I realize, a form of studying the Bible is not necessarily the first thing that comes to mind when you think of Bangkok. Nor the second. Nor the third. And yes I did partake of much that Bangkok has to offer–amazing Thai massage, beautiful Buddha statues in temples, and of course green curry, tom yum, and pad Thai with incredible flavor and dirt cheap. No, I did not partake in the ‘other’ side of Bangkok, but I did go on a tour of the red light district with an organization called Night Light that seeks to rescue women from sexual slavery and exploitation. But more on that later.

Back to manuscript study. I was blown away by it from my first encounter. Why? I’m not entirely sure, but each of the three times I’ve participated in this week-long event, it has been incredibly rich. I’ve tried to describe it a few times, including an article I wrote for Princeton Seminary called ‘Wonder Bread.‘ I wrote about it again after my experience with it four years later.

The basic gist is to take a book of the Bible (the gospel according to Mark is what is often used), take out the chapters, the verse numbers, the paragraphs and print it out, as in from the computer. Mark is about 42 pages. Well, the shorter ending of Mark. But that’s another story too. Each page has a page number (in case you drop the pile, it makes for much easier ordering than playing “I wonder what comes next” with the text) and each page is also given line numbers, every 5 lines, so that you can refer to a particular location such as “On page 1, line 10, what does it mean that they were confessing their sins?”

The format is part of it–take the study away from those paper thin pages in that leather-bound book and it can help to make it more accessible, or at least easier to write all over it without feeling guilty for ‘messing it up.’ With no chapters and verses there are no arbitrary stopping or starting points, and the story itself is allowed to dictate where one section ends and another begins.

But more than the format is the style in which the manuscript is studied. I’ve grown up in the church, so I’ve been a part of many Bible Studies, some better than others. What often seems to happen is that the text can be used as a springboard for something else. So, instead of studying Mark, we actually bring in Ephesians or Acts or Revelation, none of which are bad, necessarily, but they are not Mark. In the method of manuscript study (mss) one is forced to stay with the text at hand.

The two main questions, in this format, are ‘What do you see?’ and ‘Where do you see it?’ This, again, helps the study to stay focused within the text in question, and to try to curb the tendency amongst some to leave the text behind and pontificate on a topic of choice.

It can feel limiting at first. It can be frustrating. It can feel slow.

In our Mark 1 group (the first half of Mark–it is a two part series, with each half taking up one week)  we spent the entire first day on page 1. An entire day, 9AM to 5PM, on roughly 300 words. Among the other westerners in the group (people come from around the world) you could see the obvious body language of “Okay, I’m done with page 1, can we move on now?!” as they shuffled their papers and fidgeted in their chairs, questioning the decision to devote a week to this madness. But by the end of day 2? They didn’t want to leave at the end of the day. Seriously. It’s that engaging, that engrossing. I know, it sounds a bit crazy. But I’ve flown half way around the world three times to be a part of this process.  (well, the food and the Thai massage are enticing as well…)

So, since I can’t make it to Thailand this year I’ve decided that I’m going to attempt a blog version of a Mark study. Will it work? Don’t know, I’ve never tried it before. Seems like it’s worth a shot.

This spring when I was in Thailand I saw this ad on the Bangkok Skytrain and loved it. Though I’m no fan of Pepsi (Diet Coke is my bad for your body chemical of choice) it is a cute ad, especially in light of the World Cup.