I had been warned about Cairo subways. I love to travel, to try new things, meet new people, experience things so different from my daily life. But it’s also been somewhat beaten into me – as a woman, you must be careful. As a woman, things are different.

I’ve ridden plenty of crowded subways in my life − in New York City, in Osaka Japan, in Mexico City amongst them. Subways where one has to push ones way just to board the train. Subways where women are warned to stay close to their male companions, lest the pushing from strangers become a bit too directed.

So as we descended into the station for the Cairo subway I was prepared with such stories. There was even a car just for women, I had been told, to help mitigate some of these issues. I chose instead to remain with my male colleagues, not wanting to get separated in the journey.

We stepped onto the car. It was rather full, but not so full that we had to push our way on. But standing room only full. As I looked around I saw that I was the only woman in the car.

And then it happened.

A man next to me, seated, got up and stood next to me. As he did so he motioned something to me. I quickly realized what he was suggesting. Was this really happening?

He was offering me his seat. I smiled, and thanked him, using one of my five Arabic words – Shukran. As I settled into my seat the man next to me leaned over and spoke something in my direction. “Welcome to Egypt,” he said and smiled.

I am not doubting that there are harrowing experiences for women on Cairo subways. I’m not doubting that it is wise to keep aware and watchful when traveling in new places, navigating other cultures. I have myself experienced such harrowing subway situations in other parts of the world, as have friends of mine. Caution and entering situations with eyes wide open seem to be wise ways of being.

But what I was struck by that spring evening leaving Tahrir Square, was that I had been taught to fear, to approach the situation with skepticism, with a bit of distance, while my experience had been so entirely opposite – one of welcoming, hospitality, and graciousness.  How often are we taught to fear ‘the other’ rather than to be open to him or her? I wonder if that fear of the other doesn’t keep us from the encounters, like my own, that would so completely disprove that generalized sense of disease? For there are some who, I am sure, would have avoided the subway entirely, having heard the stories, and in so avoiding, would have also barricaded themselves from the encounter to disprove those very stories.

This theme made its way to the surface again in a passage from Esther de Waal’s Living on the Border where she discusses white South Africa during the time of apartheid:

“The white proponents of that regime were so completely and utterly confident of the righness of their stance that they shut the door totally on the other. Metaphorically, they barricaded themselves into their laagers, those circles of upturned wagons that the Afrikaners traditionally used to protect themselves on their long marches. Two worlds had now become polarized, without contact, without sympathy or understanding.”

As I pondered her words it was not long before these stories began to overlap – mine on the Cairo subway, de Waal’s about borders and exclusion of the other, and, of course, current debates within my own society and culture about inclusion, exclusion, of whom to fear and what places and people to avoid.

I find that more than any other emotion, I am thankful for that nighttime subway ride in Cairo. Something that could be seen as inconsequential, or even as reckless or unwise. Perhaps it was more of a risk that I realized. But I wonder, if we barricade ourselves off from the other, if we keep ourselves ‘safe’ from encountering those we perceive as different or strange or alien, if we are not, in actuality, putting ourselves at a far greater risk.

“Across the border then, whether it’s a human border or the strange frontier with God, is something or someone who is more hospitable than we dreamed; and we learn this by taking the risk of hospitality ourselves.”                 -Ester de Waal 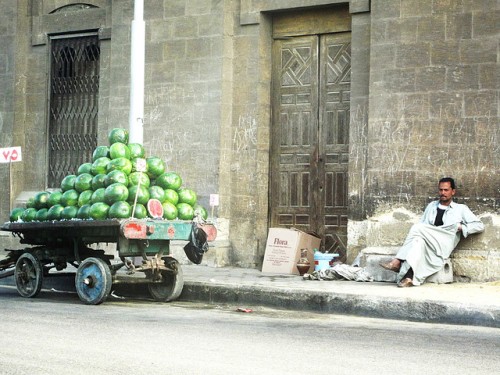 Like many images, I didn’t set out to ‘capture’ this one–it just presented itself along the way to somewhere else. An image, quite literally, of the ‘journey’ becoming the destination.

I was in Cairo, Egypt, for two days. In the evening I decided to walk down the street from the seminary where I was staying. What struck me about this house of prayer was the brightness of the yellow, contrasted with the design on the door, of the gate, and the tiled floor–the lines that seemed, in a sense, to draw one into the frame.

At first I walked past. But I was drawn back. It was the open door that compelled me. Drew me in. That is when I made this image.

Mina, my host and tour guide in Cairo, warned me that Egyptians are crazy, especially in driving. I thought he was kidding. I thought wrong.

There are no lanes on the roads in Cairo. There are also no crosswalks. What I thought was a crazy game of human frogger in Chiang Mai was nothing compared with the Egyptian version–sometimes crossing 6-8 lanes of fairly rapidly moving traffic. It really was impressive to watch, but a bit nerve wracking as well.

In addition to watching human frogger, I did also get to see the pyramids and the sphinx today. Wow.

It was pretty crazy to be seeing something right there before me that I have read and heard about for so long. Pretty awe inspiring.