Sqaush updates, preaching to the choir and other news…

Greetings from the garden,

After all that effort with the Q-tip I found out from a community college herbs and vegetables class (definitely an email in its own right) that the problem was likely either too much water or not enough carbohydrates. Though I contemplated pouring some spaghetti in the pot, I tried the ‘less water’ approach first and it seems to have worked like a charm!  My mom did comment that this seemed like a lot more work than simply going to Trader Joe’s…

I’ve also been doing some gardening with Tommy (he’s 7) in his grandparents’ (Martha and Jack) backyard.  So far we’ve got an herb garden, some undocumented succulents (yes, there’s a story there), cherry tomatoes, peppers and even a pumpkin patch! Martha makes the best pumpkin pie in the world, so Tommy figured we should grow her some pumpkins to make it from.  He also wanted to put in a fountain and a fish pond, but I told him that might be out of the scope of our initial gardening phase. In the experimental section of the garden we’ve planted an avocado pit. I think we might have some guacamole in about four years, if we’re lucky.

When I can fit it in amongst all of the gardening I am actually doing quite a bit of freelance work these days…writing, photography, and websites as well as preaching two weeks in a row. The first week I preached to the choir—literally!  I think there were about 8 people in the choir and about 7 in the pews… It was actually wonderful getting to know the 15 of them!  The following week I preached to more of a traditional congregation, size-wise. There was one funny moment when the offering had been collected, the ushers were standing in the back, the organist was playing, and playing, and playing…and all of a sudden I realized that I was supposed to stand up and call the ushers back to the front for the prayer. I wonder how long we would have sat there? If you are interested in the sermon I preached, it is posted (in text form for now) and called “It’s a Crazy Story.” Honestly, it really is a crazy story.

Finally, I am getting ready to head to Ecuador tomorrow for my third “Adopta Una Familia” trip with Erica (seminary roommate) and a team of about 70 gringos. We will all be staying with Ecuadorian families and while they will all be doing hard manual labor (mostly construction) my job will be to photograph them sweating!  Actually, this year I will also be teaching a photography class to 10 teenagers from the barrio. It should be fun, and I can’t wait to share the pictures with you! It is a mini version of something called photopiece that I have been helping my friend Leanna to teach in downtown LA last fall and this summer. 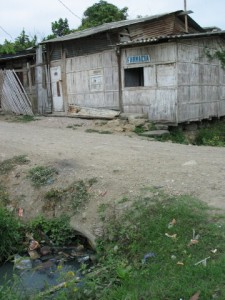 Well, the good news is that the sore throat has lessened its ‘fuego’ somewhat. Who knows if it was the leaves that Maria has been making me eat (very chewy and very sour, but supposedly they cure dolor de garganta!), the one antibiotico that I got at the corner farmacia, or the ten hours of sleep I finally was able to get last night, intermixed with waking up to loud music, roosters, and the ever present sounds of the barrio.

This is a picture of what is affectionately called ‘shit creek’ because it is where the sewage goes, since there is no sewer system in the barrio. The utilities were all privatized, which here means sold by the government to make a buck, but with no restrictions/guidelines to follow. Since the barrio is not somewhere that the companies, such as Interagua (which happens to be a subsidiary of an American company, but not sure which one..google it…) stand to make much money, compared with the new suburbs that are being constructed for the middle/upper class, they have no vested interest in putting in the basic services such as sewers and have no compulsion to do so based on the lack of government involvement. This is what we protested last year, and were promised that would exist by this year, and yet nothing was done about the promise once we left and ‘the problem went away.’

To the left is the corner store where we buy our sodas and snacks. To the right is the house where I live…and in the middle, a bunch of crap. 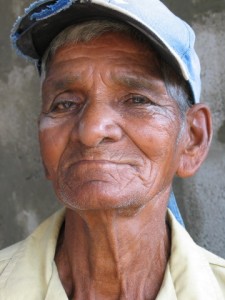 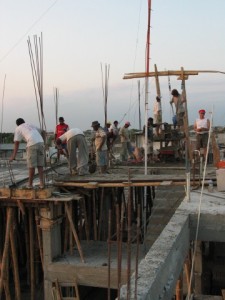 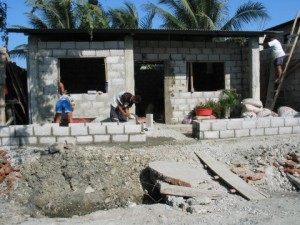 Another story from the Guas…

I have what has turned into a fairly raging sore throat. We were at the beach all day and just got back from the two hour bus ride (yes, I did take a two hour bus ride to the beach when I can drive to it in 15 minutes at home!) and I asked around to see if anyone had any medicine other than anti-diarhea…let’s just say, had my problem been that, I would have been covered, but a sore throat? Nada! So, I walked across the road to the corner Farmacia (I will definitely have to get a picture in the daylight, because you are likely not picturing it in its actuality, from this description!) which is just a ‘room’ on the corner of these people’s ‘house.’ I called in—I think they were eating or something, but the nice woman came to the ‘window.’

So, having diagnosed the problem, she turned to a shelf, pulled off a box of some sort of pill, opened the box, cut off one of the pills from the sheet, and handed it to me. Somehow she communicated to me that this would take away the swelling, and was the answer. Oh yeah, it is an anti-biotic. I wonder if my new health insurance will cover the 35 cents that it cost? I think I have a $10 co-pay, so I am not sure if they need to pay me $9.65? If it does work, and tomorrow my garganta (throat, I found out) is better, I think I will stick with the corner pharmacy for my minor health needs—no lines, no prescriptions, but of course, no idea what the heck I just took! Don’t worry, Mom, I checked with Maria and she said it, Cataflan, was good and was what I needed, though she is going to make me some sort of herbal remedy that will soothe it. Looks like I am covered either way!

Last night Maria taught me some new recipes to take home and make. Maduro Lapreada (fried/battered sweet plantain, on the left) and Corviche (hard to explain, but sort of a cross between a pad thai peanut flavor, the shape of a pot sticker, and the outer part like a corn tamale…on the right)

I am now officially a wedding photographer! Two people in the community asked Erica to marry them. They have already had the civil ceremony at the court, but since Erica is the only pastor they have, they asked her to do it. I figured they should have pictures, so I went along too! Erica had printed out a wedding ceremony in Spanish, which she read, but nothing on her church’s website told her about the other functions that she would need to perform, such as opening the champagne bottle for the toast and dancing with the guests afterward! We had had a big day, and the wedding was supposed to be at 8PM. We were scrambling to get ready, and ran out the door, arriving a few streets down in the barrio at about 8:15. The groom answered the door in his shorts with some of the crepe paper seen in the pictures, in hand. We said we would be back in a half hour, were back in one hour, and were still just a bit early!

In addition to wedding photography I have found another job! I guess when it rains it pours, huh?

Just a couple more shots from our beach trip today.

We did have a mass (that is what all of the Catholic Ecuadorians call it, though I think any priest would be appalled to call it that!) and then after mass went swimming—not such a bad church, if you ask me! Shouldn’t every picture of a communion table have a beach umbrella in the background? 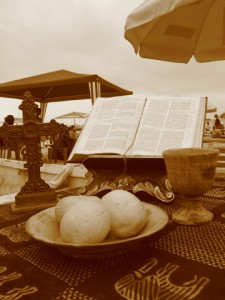