I love to ‘document’ an event, to tell its story, through photography. I actually had someone say to me once, on a trip to the Sea of Galilee, “Why don’t you put down your camera and enjoy a bit?”

To which I responded, photography is how I ‘enjoy a bit.’

As a ‘tentmaking evangelist’ photography is also one of the ways I earn my living. So, though I love to share my photos freely to help those not present get to ‘experience’ an event such as the Presbyterian Church USA General Assembly, I also exist in a world where I need to continue to fund that life.

There are basically three ways that takes shape:

1. You are welcome to order prints of any of the images from General Assembly (or other events) on my website.

2. If you are an individual/blogger please feel free to use any images for your blog, but please credit them. If you are a church/presbytery/institution/organization I am happy to discuss usage rights (for the web or print) and provide you access to high resolution images. Contact me at erindunigan (at) gmail (dot) com for more info.

3. If you’d like to hire me to come shoot images of your church/event/presbytery/organization I’m happy to discuss this with you. Contact me at erindunigan (at) gmail (dot) com for more info.

what we leave behind: Amy Grant and #GA220

On Thursday, July 5, during one of the breaks of the Presbyterian Church (USA) General Assembly, I was taken by this image–an image of what was left behind, in the empty hall.Some trash, some ‘stuff,’ and it appears much paperwork.

It got me to thinking, what have we, what are we, leaving behind? The ‘we’ in this sense, was both the event called the General Assembly, but also the ‘we’ of the Presbyterian Church more generally. What are we leaving in our wake? Knowing, of course, that the word ‘wake’ has two distinctive meanings, both of which, it seems to me, apply. 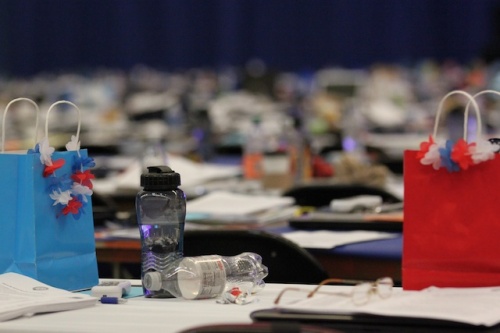 what we leave behind, Pittsburgh
© 2012 erin dunigan

That got me to thinking about Amy Grant. I know, it seems a bit of a non-sequitur. Stay with me.

Many years ago I had the opportunity to attend the National Youthworkers Convention. This particular year the big news was that Amy Grant would be performing. As a huge fan, I was thrilled.

But something didn’t go exactly as planned. There was a problem with her earpiece, or the sound. What I remember was not the issue with the sound, but her response–irritated, annoyed, and not all that nice to those who were responsible for the screw up.

Let me say–I have no idea what was going on from a technical sound standpoint, and of course no idea what had happened earlier in the day to her–this is not meant to be a slam on Amy Grant. We are all human. Sometimes we respond well, sometimes less well.

But what stood out to me all those many years ago, and what has remained with me, is that her response to the problem actually made a much more ‘unpleasant sound’ than the actual problem itself. Her response to the situation was what I heard loud and clear. And it was not a pretty sound.

Which, of course, brings me back to the PCUSA and the General Assembly, and makes me wonder, what is it that we are leaving behind us, in our wake? What is the sound that the world (those who care to pay attention) are hearing from us?

Lately online there has been a discussion of whether or not ‘liberal Christianity’ is dying. The first piece in this recent volley was by Ross Douthat, Can Liberal Christianity Be Saved? It is a critique of the Episcopal Church and its ‘flexibility to the point of indifference on dogma’ (including its recent decision to bless same sex unions) which Douthat implies is the reason for the church’s dwindling attendance.

Douthat’s piece brought a speedy and thoughtful response from historian and author Diana Butler Bass, Can Christianity Be Saved. Bass is herself on the more ‘progressive’ side in the Episcopal Church and in her recent book, Christianity After Religion: the end of church and the birth of a new spiritual awakening goes into much depth on the issues surrounding denominational decline.

But I think my favorite post was by Adam Copeland, Douthat & Bass: Asking the wrong question in which he admits that “The premise of both pieces has left me wanting.”

To which I say, Amen.

Because though liberals and conservatives alike enjoy claiming that the reason denominational numbers are in such decline is because of them, those people, the ones we disagree with (because it can never be our problem, can it?) I wonder if we are not more like Amy Grant than we realize.

Because what I have begun to wonder is if it is the disagreements themselves that are the problem.  By that I mean, the way we are living them out.

So we disagree? The world is full of disagreement, on really important issues.

Why not, rather than more of the same tearing each other apart that we can see modeled daily by the likes of Rush Limbaugh or Rachel Maddow, on Fox News or MSNBC–why not model how to disagree well, respectfully, lovingly–prayerfully, more than politically.

Why not model how to love one another in spite of our differences, in spite of our disagreements? It is, of course, easy to love those who love you–the Bible tells us. Why not practice what we preach and learn how to love those we’d really rather not? Those who bug the you know what out of us? Those who we’d rather not include in our family photos of what it means to be Presbyterian, or Christian? Of course this isn’t easy. Of course it doesn’t come naturally. Of course it’s not always our first response. Or even our second.

The thing is, I don’t even remember what song Amy Grant was singing that day–and I was a fan. It would be safe to say that hearing her perform would have been the highlight of most definitely my week, perhaps even month or more. I knew all the words of all her songs by heart. All of them.

I don’t remember the song, because all she left me with was the memory of her response. Irritated. But more than that, rude to those she deemed responsible for the problem. There was a problem. It needed to be solved. It was not even her fault. But she lost some of my respect that day because of how she handled the situation.

So, I ask it of myself, and of my church, the PCUSA–will the rest of the world remember our song–the words we are singing, the beautiful melody, that which we feel deep down at the core of our beings that we are called to share with everyone who can hear?

Or will the only thing left in our wake be our response?

But instead, I chose to stay.

Staying, in this case, meant attending two events of the 220th PCUSA General Assembly back to back—one hosted by one of the more conservative/evangelical groups within the denomination, the other, one of the more liberal/progressive. It occurred to me, as I was walking from the first to the second, that in attending both I was, as it were, in a fairly small subset of the wider Assembly population.

It’s a subset that I find myself in quite often, actually, mainly due to my work, as a writer and photographer, for many ‘wings’ of the Presbyterian Church. But it’s also one I’ve chosen to occupy, as it were.

Most of the time, it’s a choice that I am happy to make.

But last night, after two encounters with fear, suspicion and distrust of the ‘other’—the first from the more conservative side, the second from the more liberal one, I wondered. Why bother? Why not just leave? The sounds coming across the river from the PNC Park and the Pirates game, of the crowd cheering made me question—had I made the right decision, am I making the right decision? Why not just go to the baseball game?

It was a far place from the ‘giddiness’ I felt as I began this journey to Pittsburgh. Was it a more ‘realistic’ place, this weariness and wondering, than the giddiness? Many would say so. Many would say that the giddiness, and its related hope, are at best optimistic, more likely naive. They may well be right.

As I left the second of the two events I was disheartened to the point of almost choking up. Frustrated by the fear. Discouraged by the distrust. Saddened by the suspicion.

I’m still here. Partly, because I have to be—I’m working. But more because I choose to be.

Because in spite of our challenges, on all sides of many issues, to love each other well, I trust that God is bigger than all of our differences. I choose to trust in the Triune God who has created us, redeemed us, and continues to sustain us—all of us, liberal, conservative, evangelical, progressive, Pirates fan, Astros fan…

May the peace of Christ, the love of God, and the power of the Spirit be with us all as we begin this Assembly.

It’s hard not to notice them–they’re everywhere in the riverside town of Pittsburgh. Bridges.

Our shuttle from the airport brought us over one as we entered into downtown. From the convention center, where the 220th General Assembly of the Presbyterian Church USA is being held, you can see them whether you look to the left or to the right.

It seemed to me, as I looked out over the river, that it is an interesting physical location, to be in a place, geographically, that demands bridges while of course being in a place denominationally that seems to need them so critically at this moment.

Bridges, of course, don’t turn one side of the river into the other. Both ‘sides’ keep their distinction. But what bridges do is to allow those ‘sides’ to relate to one another, to have contact with one another, and to even travel back and forth between them.

A bridge doesn’t change the fact that there are sides. A bridge by its very definition assumes the reality of ‘sides.’ But a bridge sure makes it a lot easier to navigate them than having to jump into the water and try to fight the current across.